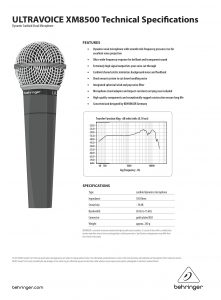 My recent foray into amateur radio audio quality has had me looking at microphones, and since the audio process I just bought has an input for dynamic microphones, I got to researching those.

I didn’t go looking at Heil Sound for microphones, since I wanted to do this on a budget, and you can certainly burn through a lot of money shopping at Heil.

One of the long-time kings of vocal microphones has to be the Shure SM-58. Tailored frequency response for the human voice makes it a good bet for over-the-air voice audio. The current price for an SM-58 on Amazon USA is $99.

Upon doing some Googlin’ for an SM-58-like microphone, I came across the Behringer XM8500 microphone. It looks like the SM-58, it is a dynamic microphone with a cardioid pattern, XLR connector, and a very similar frequency response. The asking price currently for the XM8500 on Amazon USA is a few cents over $20.

What is the catch?

The Behringer XM8500, like the Shure SM-58 rolls off nicely below 100 Hz, and has emphasis starting at 1 kHz rising to 3 kHz which is perfect for a cutting voice tone. The XM8500 has a higher output level than the SM-58 though, so it won’t require as much gain.

…and a comprehensive review of the XM8500.

I am getting very good audio reports using this microphone and my UR6QW audio processor. See that page for more information on settings, etc.

If you want information on adding a DC blocking capacitor when using a dynamic microphone on a transceiver which is designed for use with an electret condenser microphone, see this post. 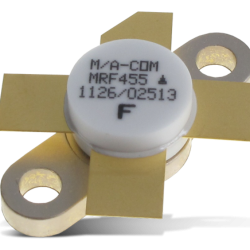 More AD5GG
AD5GG
AD5GG works in the real world primarily as a board-level RF designer in the UHF (300 MHz - 6 GHz) range. Occasionally, he posts articles on this very site. Sometimes they're even worth reading.